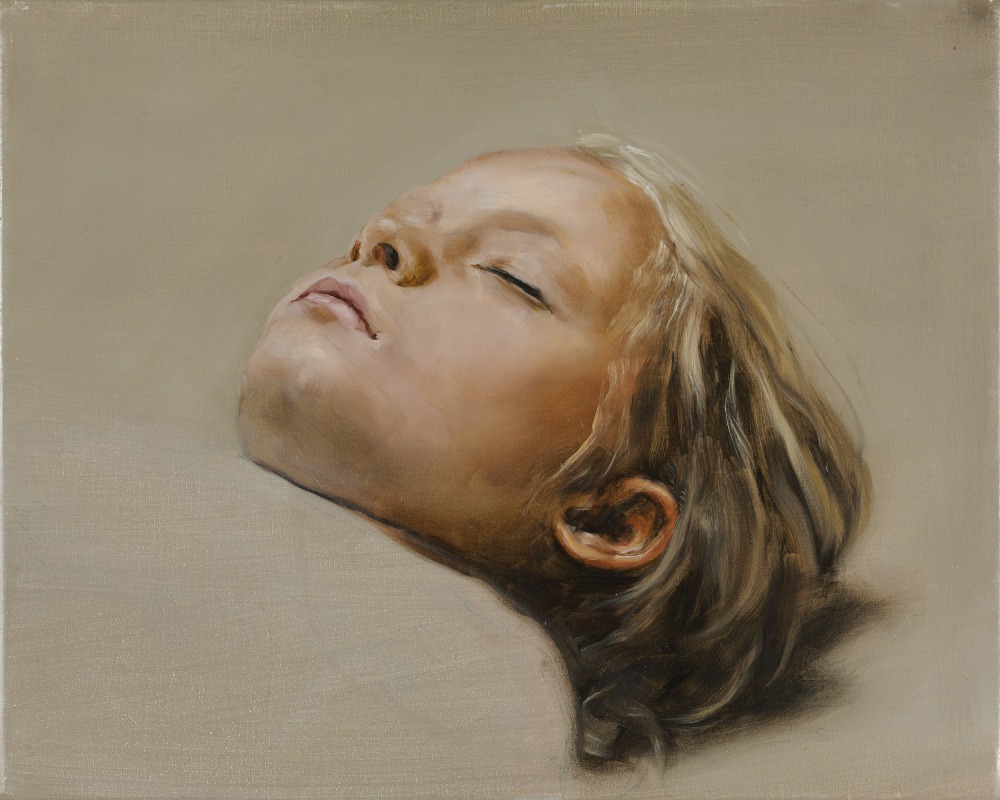 Michaël Borremans is artist and filmmaker. A lot of his art has it’s origin in old photographs. Borremans alienates them with his art. Often he shifts no more than nuances, the boundaries between photorealistic paintings and painting like photographs are blurring. Over 100 dreamily beautiful and poetic pieces of the Flemish artist are now published by Hatje Cantz Verlag. The art book contains as well 50 essays by distinguished authors, which speak for themselves.

Somewhere in the world of Rembrandt and Hopper, I feel this is where Michaël Borremans’s paintings are conjured. Such a skilled painter he is who creates paintings which are fare more than the sum of the parts. There is in his work the magic to make us dream. The Angel, for example, which is so beautifully painted, brings out to the viewer such a dream. Thoughts and questions begin to erupt like electrical sparks kicking in words like sadness–unity–diversity–the time that we live in–the mixing of cultures, peoples, ages and sexes. And throughout, soaring out through this painting, a feeling of selflessly taking on burdens–love–and compassion. DAVID LYNCH

I would just like to say this about The Devil’s Dress: once, on the wettest day in 2011, at a fine art gallery in lower Manhattan, I was standing face to face with two works that bear this title, and had decided to stay there at least until my clothes were completely dry. It made me think, in passion, of a friend of mine who is a real expert on women. I remembered that he had once said: »The loveliest thing a beautiful woman can wear is a red dress.« And than he added, rather somberly: »But all the women I have known who liked to wear rad later turned out to be real demons.« Which was then followed by a gentle, blissful smile, so it can’t been that bad. So that’s what I was thinking, there in New York 2011. And I also thought: »Michaël Borremans can do anything.» MARC DIDDEN

The proportions oft he Hours of Opportunity, with it’s endless windows and sheer walls, are reminiscent of a place of authority, of mass-learning, a school or a library. In it’s variable scale and fluidity it is a reminiscent of Jorge Luis Borges’s library of Babel, where hexagonal rooms accommodate all visitors, the library’s boundaries never in sight, never attainable. Both buildings are unfathomable, impenetrable, vast and otherworldly. […] the House stays in our minds as a mysterious and dreamlike structure, the opportunities it promises always mercurial and out of reach. CHARLOTTE MULLINS

To judge by the look on his face, the young man is waiting for a direction. What role is he playing? It must be a giant, because he is more than three meters high. So which giant is he playing? […] The artist avoids answering the question of what the »Avoider« is. Wordless and waiting, he looks past the viewer, a shepherd without a flock, a leader without a mission. Even though, as an actor, he does not have an audience, he does have viewers. What are we, actually? Not giants, because our perspective is from below. Sheep? Waiting to be herded? We don’t know where the journey will take us. And the leader doesn’t know either. But we have a vague idea that sometime very soon, we will hear the director’s voice from offstage, and that the actual story will start then. LISA ZEITZ

Perhaps it does not matter if 10 is a paridae and 11 a passer domesticus, It might be more important that domesticus, translated from Latin, means »belonging to the family«, and at the same time the whole family of passeridae are a synanthropic species (known in German as Kulturfolge, literally, culture followers). The German root words, Kultur (culture) and Folge (consequence) indicate that the species is obedient to (or dependent on) the human species. Looking beyond their cuteness factor, 10 and 11 are therefore something like cockroaches or rats. […] In this system of representation, Michaël Borremans’s painting signifies no more and no less than the process of creating a different kind of visibility, which intervenes and transformst he symbolic, giving it an essential relation to 10 and 11–»belonging tot he family of living things.» The technocratic potential of being able to randomly shift the boundary of »belonging to the family« that exists between passeridae and Homo sapiens is the actual scandal we observe here. To be continued. HANS D. CHRIST

Again I lose myself
In whitewashed halls
Of spectral charm
Chasing the illusions
From which stardust memories are born.
THOMAS CLAUS